The Arenacross Tour is set to explode into 2018 with a bigger and better format for its seven-round action-packed UK indoor Motocross race series and Freestyle extravaganza. There’s a new and exciting twist too; a four-round World Tour.

The UK-arm of the Tour will take in some of the country’s leading concert arenas across six cities, namely, Manchester, Newcastle, Birmingham, Belfast, Sheffield and London. And now, with the launch of the Arenacross World Tour, thousands more will be treated to the Arenacross magic as the whole operation, excluding the dirt …, will be packed up and shipped out to Belgium and Germany. 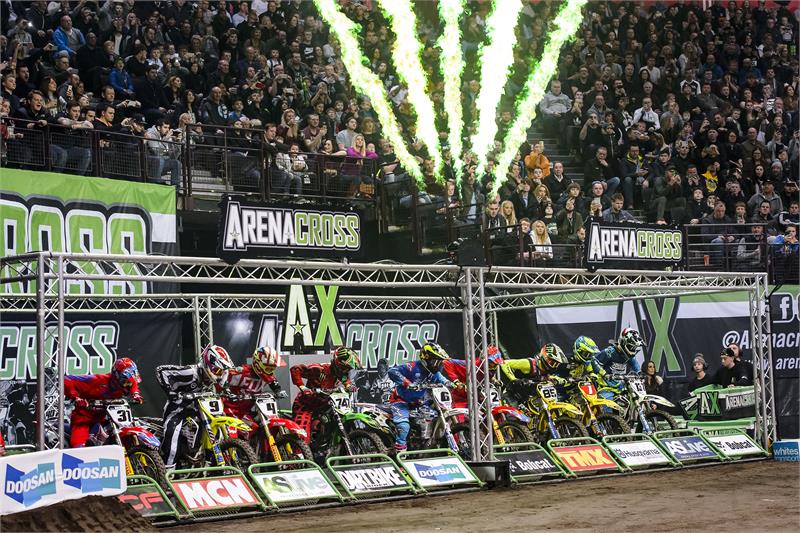 As is fitting for the UK’s vibrant capital city, London has a dual role to perform in terms of AX as the stop at Wembley forms both the last round of the UK Tour, and the opening round of the World Tour. The World Tour then goes into a double-header at the Ethias Arena in Hasselt, Belgium, a country that is widely acknowledged as the home of European motocross with many of the world’s leading riders and teams based there. The AX World Tour will climax at the incredible Esprit Arena in Dusseldorf, Germany, which is a massive 50,000-seater, complete with retractable roof, in one of Europe’s largest cities – the stage is set for the AX World Tour Finals to be the biggest round of the Tour.

For many, the prospect of putting on a motorcycle and entertainment Tour of such magnitude could appear daunting but AX promoter Matt Bates has been working on this for quite some time now, and he’s never one to shy away from a challenge. “This is most certainly the first step of many in our expansion of the AX brand and race series and I couldn’t be more excited about the countries and venues that we’re expanding to. Europe has become the new leader in motocross, so why shouldn’t we now start our climb to the top of the indoor world. I believe we undoubtedly have the ability to create great shows, develop incredible talent and most importantly, sell tickets!”

AX throws together an intoxicating mix of world-class indoor Motocross racing, high-flying Freestyle Motocross and a show to rival any music festival. In its five-year history, it has seen thousands of fans streaming through its doors every year.

In 2018, the crammed Tour programme will again include radical Freestyle Motocross, where the giants of the FMX world will showcase their breath-taking skills and try to outdo each other with their tricks and backflips, some forty foot above the arena floor. In the past, AX has attracted the likes of European God Father of FMX and multi-X-Games medallist Edgar Torronteras, top Brit Jamie Squibb, fresh off the Nitro Circus Tour, and the incredible back-flipping Czech giant Petr Pilat.

On the racing front, the most successful Arenacross racing gladiator; three-time AX Pro Champion Thomas Ramette, relishes the opportunity to take on the world, and is already geared up for 2018. “Arenacross is a great championship and I’m really happy to see that it is now heading to Europe. A lot of hard work has gone into winning three times, and I’m more than ready to put the effort in again to make it a fourth. I’m excited to see how the rest of the world reacts to Arenacross.”

With its highly-charged atmosphere, thumping beat, spine-tingling soundtrack, lasers, lights, and presenter hype, onlookers are left in no doubt that being an Arenacross spectator means they’re as much a part of the show as the racers themselves. It’s an epic night out!

Tickets go on sale next Tuesday, the 26th of September 2017.