Britain’s leading off-road titles – TMX and Dirt Bike Rider – need little introduction to trials, motocross or enduro fans as between them the two award-winning titles have been servicing the needs of the nation for almost 40 years.

TMX is of course a weekly newspaper that delivers an up-to-date dose of news, race reports, columns, classifieds and upcoming event information while Dirt Bike Rider is it’s glossier, monthly cousin that is jam-packed with features, rider interviews and the most authoritative bike tests around.

While we’ve got all bases covered in print and online (check us out at tmxnews.co.uk and dirtbikerider.com) we saw a gap in the market and grabbed the holeshot…

It’s fairly amazing what the new breed of Smartphones are capable of these days – I mean, all useful activity in the DBR/TMX office just ground to a complete halt while we battled it out on Pokemon GO just now – and thanks to our good friends at Rumble we’ve just made the globe’s Smartphones even smarter. That’s because Rumble has helped us develop and launch a pair brand-new news apps that deliver breaking dirt bike stories (that’s dirt bike stories as they happen and not just stories about broken dirt bikes – although they do feature in the feed occasionally) direct to your device.

Two for the price of none
You can forget all about BOGOF offers here as our apps are available to download right now from Google Play and the Apple App Store for free – yep, that’s nada, nowt, nuffink, zero, zilch and so on!

Groundbreaking
The Dirt Bike Rider and TMX news apps are pretty much the first of their kind in the English speaking world and deliver an exciting stream of news, imagery and videos – y’know, stuff you really wanna see – and are nothing like those crappy apps that are just substandard digital versions of actual magazines. Boring! What is the point in them anyway?

Collect them all
If playing Pokemon has taught us anything it’s that we have to collect them all. And while the TMX and DBR news apps are similar in look and function the content is most definitely different so don’t delay, be smart and download both our free news apps today. 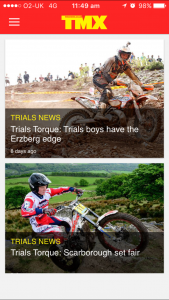